Did you know that Pocopson Township was formed from sections of Pennsbury, East Marlborough, and West Bradford Township land? In late 1848, 28 male residents from these Townships, along with Newlin, signed a petition to the Court of Quarter Sessions pleading that “they labor under great inconvenience for want of a new township to be composed of part of (their existing) townships.” Eusebius Barnard, Pocopson’s future Underground Railroad leader, was among these men. The new township was approved on September 13, 1849, with the court filing orders for Pocopson to elect its officers. The name Pocopson came from Pocaupsing, the Indian name for roaring waters. 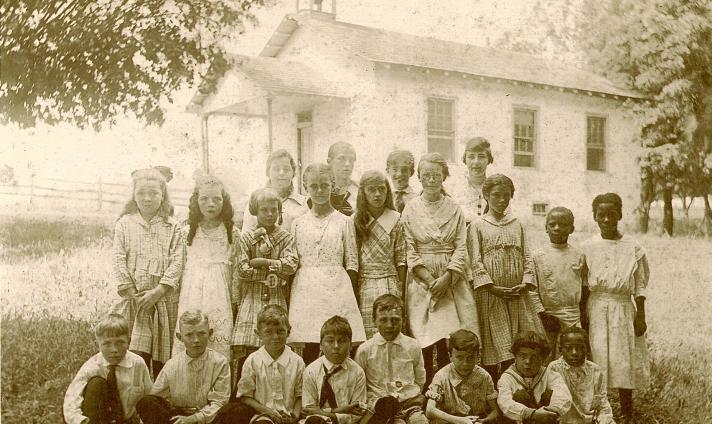 The oldest village in Pocopson was Locust Grove, located in the center of the new township. By 1881, the village included the following: a general store, broom factory, shoemaker, blacksmith and wheelwright shop, farms, school, creamery, and post office.

The village of Northbrook also had a general store, blacksmith and wheelwright shop, post office, school, and Brandywine Fence Company. Its ice storage business was unique; ice was cut from the frozen Brandywine and shipped via the railroad to Wilmington.

In 1892, a general store was built in Lenape, along the Brandywine. Truman Lloyd was the storekeeper. The family sold this property and a restaurant was started by the new owner. This later became the Lenape Inn, and currently is the corporate headquarters for Sklar Instruments.

The 1873 map of Pocopson Township shows three masonry one-room schoolhouses.
1) The Baker School (established in 1866) was located on Route 842 on what was then George Baker’s farm, now the Brandywine Valley Association.
2) The Locust Grove School (1870) also served as a township meeting and polling place. Christian Sanderson, a well-known resident, taught there in 1909. This Schoolhouse is currently being renovated for future educational activities.
3) The Lenape School (1882) was built on John Huey’s property. It was built for children in the newly developed Brandywine Hills. This school has been repurposed as a business within the Lenape Village shops.

All of these one-room schools were closed in 1923 as all area children moved to the new consolidated Unionville School.

The First Settlers: Lenni Lenape
There were four Indian villages and campsites in or near what was to become Pocopson Township. Two were on the Brandywine: one just north of the current Route 926, and the other Northeast of Route 52. A third was around Marshallton, and a fourth just over the line in Newlin Township. These Native Americans were part of a tribe which had occupied the territory for thousands of years. Usually found near some river or creek valley, they called themselves “Lenni Lenape,” meaning common people. A Lenape village might consist of 50 to 200 people who live in round or oval houses or wigwams. There were no windows, and the roof was made of tree bark or woven grasses. A hole in the roof let out the smoke from an open fire.

In the 1680s, there were 30 to 40 stream tribes in the Delaware Valley, sharing a common language but otherwise socially and politically independent of one another. Each tribe had its own chief or elder; there was no single Lenni-Lenape chief, nor a council of all the tribes.

As more and more Europeans came, most of the Lenni-Lenape gravitated (or were forced) out of the area. The last person, known as Indian Hanna, stayed until her death in 1802 at age 71. She was an early Indian activist, speaking out on the wrongs done to her race and the misfortunes that had befallen them. Currently, a historical plaque, located just outside Longwood Gardens, marks her passing.

European Settlers
The Dutch were the first Europeans in Chester County, in 1616. The English followed in 1634; the Swedes in 1638; the Finns in 1640; and the Welsh-Quakers in 1682. In the late 1600’s the English Quakers and Scotch-Irish Presbyterians predominated in our southeastern Chester County region.