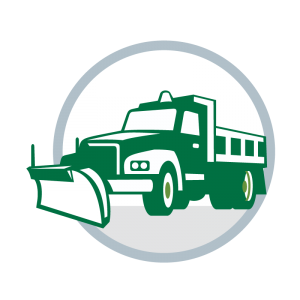 The Pocopson Township Public Works Department spends long hours in tough conditions to make the roads as safe as possible. Please cooperate with these guidelines so that snow removal can occur quickly and safely.

For winter storms, the Township is sectioned into three routes. One large plow truck is assigned to each route and two smaller trucks rotate among the routes as needed.

Road clearing will be undertaken around-the-clock unless conditions render clearing efforts useless. In such cases, plows will remain on standby for emergency situations.

Each route includes high and lesser priority roads. When a snowstorm begins, operators will cover their entire route with salt and anti-skid materials. This keeps the snow and ice from freezing to the streets. Plowing begins when the snow accumulates to a depth of two inches.

How You Can Help Us:
It is not uncommon for plows to push snow in front of driveways. Typically snow is moved to the right of a moving plow and onto the shoulder or edge of the roadway. Prevent your driveways from being plowed shut by removing snow to the downside of the driveway.

During a winter storm, do not park on the street. Vehicles in the street delay road clearing. Remove vehicles from the street before the storm and keep them off the streets until streets are cleared. Illegally parked vehicles will be towed and fees of $125 and up will apply.

Do not shovel or push snow into the street. This is a safety hazard and could cause an accident. Homeowners can be fined for this and be held responsible for an accident.

Damage to vehicles caused by snow and/or cinders from plow trucks are not the Township’s responsibility, which is one of the reasons we ask that vehicles be removed from the streets. Plows must clear streets curb-to-curb to prepare for subsequent storms.

In all cases, the Township avoids damaging property. However, mailboxes are often placed in the township or state legal right-of-way, which means that the Township is not liable for damages to mailboxes caused by snow removal operations. Property owners should ensure that their mailbox rests on a firm support so it will be better able to withstand the force of snow coming off the plow.

On March 22, 2010, the Board of Supervisors passed Resolution 2010-14 regarding Parking and Towing during Snow Removal.

On September 22, 2014, the Board of Supervisors passed Resolution 2014-15 outlining detailed Snow Removal Procedures.

The Township does not remove snow and ice from undedicated roads.